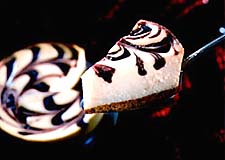 Sara Lee Bakery (Chicago) is beginning a national roll-out of its new full-sized New York Style Cheesecake, as well as individually portioned Cheesecake Bites and Singles. According to the company, successful test markets in Chicago and San Francisco demonstrated consumers' desire for indulgence and convenience. Part of convenience, however, is speedy preparation.—a feature not always associated with frozen cheesecakes. Thanks to creative formulation, the company is able to let consumers have their cheesecake and eat it quickly, too.

A plan for convenience
Sara Lee's technical staff took nine months to develop the Bites and Singles products while the New York style took about five. Trying to pinpoint how long it took to create the concept, however, isn't as clear-cut since the company conducts ongoing consumer research. In particular, Sara Lee, has done extensive research into understanding how dessert fits into today's consumers' lifestyles.

"We have listened carefully to both our consumers and customers regarding their interest in simple indulgences," says Laura Shapira, director of brand marketing for Sara Lee Bakery's cheesecake business. "Both groups, as statistics have shown, told us they want quick, convenient desserts that are still premium in taste."

One way the line addresses the convenience issue is with its various portion sizes. The Bites provide a quick snack, Singles function as a dessert for one or two, and the full-size New York style is designed for family meals and entertaining. Another key element of convenience, in consumers' eyes, is preparation speed. This, too, was a critical factor Sara Lee wanted the line to address.

"Today, the trend indicates that consumers want to treat themselves to the best-tasting foods," said Ed Haft, president of Sara Lee's Grocery Div. "They feel they deserve to indulge, however, they don't have time with the busy lifestyles they lead."

Meeting the needs of time-pressed consumers meant addressing the fact that many frozen cheesecakes can take up to five hours to thaw. Many consumers will choose to eat something else rather than wait.

"Dessert is so impulsive and we felt we were missing that part of the market," says Sandy Glatter, product development manager for Sara Lee Bakery. "Our products are typically not impulsive. The freezer is our friend because we don't have to use preservatives, but it's our enemy because of thawing time."

Sara Lee's solution was to create a no-thaw technology so the cheesecakes can be eaten right out of the freezer. This technology allows consumers to have cheesecake without thawing or waiting.

The chemistry of cheesecake
Although one might assume creating a cheesecake that's soft enough to enjoy while still frozen would require the application of high-tech ingredients, that is not the case. The company achieved the product's eat-from-the-freezer qualities by creating a new, proprietary technology that Shapira describes as a "creative application of existing ingredients."

"People think it's some sort of special chemical," says Glatter. "I even heard someone say that our use of fats makes it edible out of the freezer."

For business reasons, Sara Lee representatives balk at giving specific details, but a look at the ingredient listing does offer some clues. Besides sucrose, the product contains several different corn sweeteners such as high-fructose corn syrup, corn syrup and dextrose. Could the Sara Lee scientists have found a way to soften the texture of the frozen product by combining different sweetener solids to depress the freezing point? This approach is commonly used in ice cream which is an aerated blend of dairy solids, sugar solids and fat—a matrix that is similar to cheesecake filling. Company representatives confirm that they do compare the new technology to ice cream formulation.

Development approach
Although the right texture was key, the Sara Lee cheesecakes still had to maintain rich creaminess, and an appealing flavor and aroma—particularly the browned baked flavors. For successfully balancing the texture technology with the organoleptic properties, Glatter gives credit to the efforts of Carol Finople, product development scientist.

Finople approached the project with incremental goals. Initially, the target was to have the product edible with a 10-minute thawing time. Once she achieved this, Finople adjusted the formula so that it required only 5 minutes of thawing. Finally, she created a formula that was stable and had good eating qualities even when frozen. For a creamier texture, the packages suggest a thawing period of 5 minutes for the Bites and 10 minutes for the Singles and New York-Style products. This is, however, the same recommendation often found on superpremium ice creams and is well within meeting the product's concept.

In handling such a project Glatter also gives a nod to old fashioned creativity. Not just creatively applying food chemistry principles, but being open to drawing technology from other food areas.

"True innovation sometimes comes from understanding a wide range of processes," says Glatter. "This is especially true about the Bites where we combined three industries: ice cream, baking and confectionery."

True to its openness for incorporating diverse technologies, the company plans on making sure the lessons learned from creating this new line don't end with cheesecake. "We're planning, as we continue changing and reinventing our lines, to introduce the new technology where appropriate," says Shapira.